Narcissus in this scheme can do evenbeginners, we do not need a lot of time, in order to collect even the largest bouquet. To make narcissus, we need to prepare several sheets of green, yellow, white paper and a tube for drinks. This scheme is very good because we need only 16 modules of white color and one yellow, unlike other modular origami. To make a leg of a narcissus, we need a green paper. We wrap the tube with this paper and fix the edge with glue. glue. And now we will take a closer look at the processmaking origami daffodil. We start the work with the central module, it is done in the same way as the modules of the Kusudama "Supershar": 1. the workpiece of 8 * 8 size made of yellow paper is folded horizontally, vertically, diagonally and backwards as shown in the first picture; 2. To obtain a rhombus, we add the workpiece to the diagonal seams left by the folds inward, as indicated in the second picture; 3. Fold the side faces of the diamond into the center of the vertical line. Repeat four times as shown in the third and fourth pictures; 4. then, the lateral line that turned out, we heat into the middle of the triangle as shown in the fifth picture, in the end we get a workpiece with six angular faces; 5. Then bend to the center of the lower corners of the internal rhombs, which turned out. So, as indicated on the seventh in the picture; 6. We repeat this action from all sides and straighten our sheet back as shown in the eighth picture. As a result, we will get a blank with the planned lines to collect the module; 7. further, the narcissus origami assembly continues, making a bend to the center, along the marked lines of the two diagonal lines, as shown in the ninth picture. 8. Based on the fact that we have four corners, then we repeat this action three more times, we get such a result as in the ninth picture; 9. Then we bend into the middle of the module all four sharp angles as on the eleventh picture; 10. as a result of our work, we will get a module of the Kusudama "Supershar" or the core of the narcissus. We collect sixteen modules from white paper and collect the petals of narcissus from them: 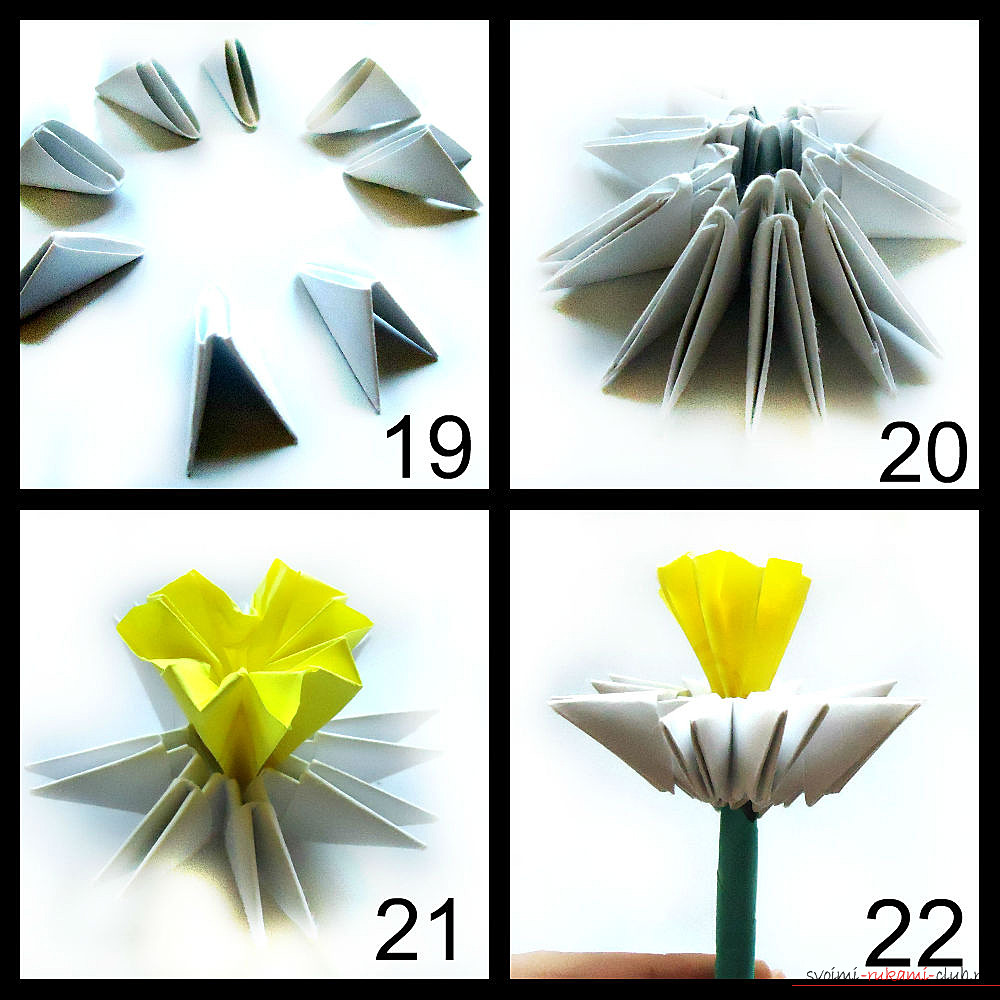 1.take a rectangular sheet of paper and fold it in half along the way as in the thirteenth picture (we use half the workpiece measuring 8 * 8 cm); 2. Fold again in half, but already vertically, as in the fourteenth picture; 3. Fold the product to the center vertically bending at an angle of 45 degrees, on each side, as in the fifteenth picture; 4. turn to the reverse side, and those edges that are free, also bend at an angle, so, we get a workpiece in the shape of a diamond, as in the sixteenth picture; 5. bending the two triangles, which turned out in the previous step to the center, we give the shape of the square of the rhomb, as in the seventeenth picture; 6. To obtain a classic element of modular origami, add the module last time twice as indicated on the eighteenth image. Now all we have to do is collect all the narcissus together: 1. put one circle of eight white modules, wide side down and short in the center of the circle, as in the nineteenth picture; 2.Odevayu eight more modules, pairwise connect the parts of the first circle, as in the twentieth picture; 3. insert the module from the paper yellow, from above to the center of the circle, and from below - the leg of the narcissus, as on the twenty-first and twenty-second picture. Our daffodil is ready! If we collect a few daffodils, we canmake a bouquet and decorate them with a table. Also, daffodils can be combined with other flowers and creating a huge bouquet, you can hand in as a gift. And it will be a wonderful gift, created by yourself with a piece of your soul. The bouquet will be appreciated, but to preserve the bouquet of origami, the flowers of narcissus in which are made of paper, can be for years, because they will not fade!

The scheme for creating modular origami snowflakes from paper for beginners. Detailed master-class with photo

The scheme for creating a modular origami tree from paper for beginners. Detailed master-class with photo

The scheme for creating a modular origami swan from paper for beginners. Detailed master-class with photo

The scheme for creating modular origami chamomile from paper for beginners. Master class with photo