Pick up a kit for a boy is much more difficult,than for a girl. Therefore, in this master class we will make a kit for the boy. It reminds me of a cap and a pilot's scarf, the "glasses" are fixed on the cap, and the scarf flutters in the wind. Legend: VP - air loop; SP - connecting loop; SBN - a column without a crochet; SSN - a column with a crochet; SPN - a column with a half-napkin. For knitting we will need a yarn of three colors. At me the basic color - "Pechora the Wool with an acryle" with a shade "Blue turquoise". For the eyes I use a similar black yarn and white acrylic yarn. In the next row in each loop-base weWe are tying 2 CLS. In order not to forget where the series ends, you can put a special marker, a simple pin or thread of a different color in the last loop. Next, we will add to the usual circle. The next row is knitted with alternating 1 CLS, 2 SSNs in one loop. Then 1 SSN, 1 SSN, 2 SSN in one loop. In the following we add 1 CLS in each new row. The result is a circle. After we have completed the increments, the markercan be removed. But I would advise nevertheless to track the ranks to know when to reduce the bars at the end of work. We knit the CLS to the required depth of the cap. In the last row 10 sticks at the end are knitted as follows: 4 SPN, 4 sc, 2 SP. We finished the base of the cap. Now we knit the ears. Count the number of loops along the edge of the cap, divide by 5. One part we will go to the back of the cap, one piece to the ears and two pieces to the front of the cap. In this case, 94 loops - 18 on the back, 2x19 on the ears, 38 on the front. We retreat from the end of knitting half of the loops for the back and knit the RLS first row of the eyelet. 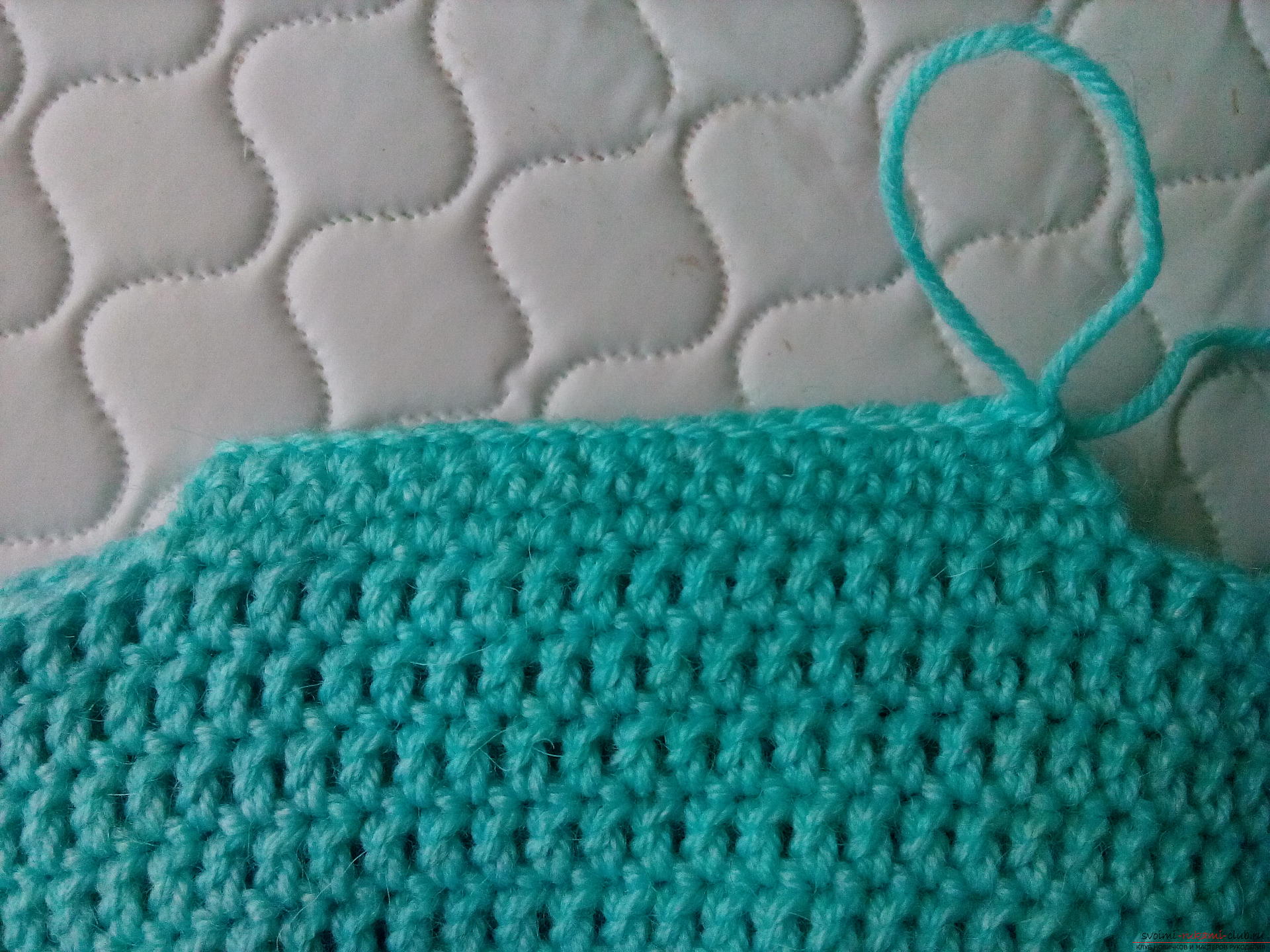 In the next row, we do not make reductions, thenagain around the edges we cut the loops. By this alternation we knit the ears. After approximately 10 rows, we cut the last rows of three loops from each side in each row. When both ears are tied, we make the strap along the entire length of the RLS edge. Similarly, at the bottom of the cap, we knit two black circles in a spiral. We tie one circle around the circle with white color. Then we make 2 VP lift and we sew 5 RLS. So we knit 5 rows. Next, we tie a second circle and join the seams. Now we knit a strip of 5 RLS and connect it with circles (in total such "glasses" should be equal to the circumference of the cap). We tie or sew "glasses" to the cap. We make shoelaces on the ears. The hat is ready. Let's start knitting a scarf. We type the chain of VP of the required length, in this case 1 meter. We type 2 VP lift and weave a series of CCS. We type 3 VP of the pedema and knit the SSN for the back part of the loop. So we knit to the end of the row. We turn knitting, the subsequent rows are knitted similarly. Correct the number of rows in the width of the scarf. In my case, 11 rows. The scarf is ready. So this set turned out in the end. It is perfect for any boy and will make him feel like a captain of an airship. Cap knitted with needles for newborns with photo and description

How to sew a Baby Bean doll's overalls with a pattern with their own hands with photos and instructions.