As it turned out, the origami "Peacock" is one of thethe most common types of work performed in this technology. On such a "peacock" you can be fascinated to watch for hours. From this master class you will learn how to create such beauty with your own hands. Such origami will please you and your family for a very long time. The proposed version of origami consists of several multi-colored triangular sections: pink, white, green and orange shades. So, let's start making origami "Peacock". 1. We will collect our peacock from the tail. The tail consists of twenty-eight section-modules. Lay out sections you need as shown in the photo: 2. Create feathers for a peacock tail. 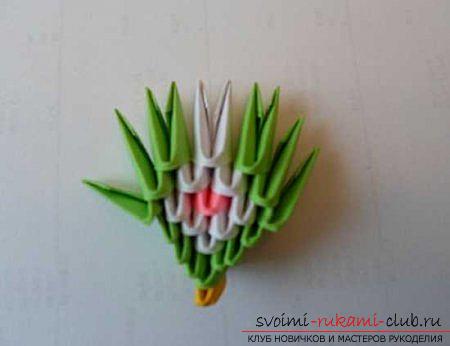 3. We proceed to the assembly stage of the peacock's body. The trunk itself consists of thirty modules. Six rows should be laid out round, and then on the eleven modules should lay out the breast of our birds. In all subsequent rows, it is necessary to put 1 less module than in the previous one. 4. Then we turn to making the neck of a peacock. In this case, you also need to alternate sections by color, as seen in the photo. At the base of the neck is twelve rows. 6. Note that the tail includes nine modules, and the wing base consists of five modules. 7. To create a peacock stand you will need sixty-six green, as many orange and yellow modules. We also replaced the green sections with blue ones. In the first row of the base of our stand there are thirty-three yellow sections, you need to collect two rows of yellow modules, and then put them together in a circle. In the third row we put thirty-three modules of orange color. In the fourth row, you need to alternate sections by color: two - orange and one - blue. So create the whole series. In the fifth row, one must alternate in this way onethe module is orange and two are blue. The result is twenty-two blue modules and eleven orange sections in a row. When you finish working on our peacock, create beams between the two blue sections of the fifth row. We need to add two modules first, and then add one more to them. So we do it all round. In total, you will need thirty-three blue sections.

That's all. The stand is completed.

A master class with a description and a photo of the origami itself - a modular monkey.

Learning to create a Snegurka costume with your own hands for a girl with a description and a photo.

How to learn how to create interesting wedding hairstyles for medium hair with your own hands with a step-by-step description and photo.

We learn to create original crafts for the New Year 2016, a snowman and a snow composition with our own hands with a photo and description.