Knitting toys takes a bit of thread and time. And the navel looks charming and even a little funny. It can be used in the game with children, and can be used as an ornament for the interior. To knit a doll in a costume, we will need:

The skin of our puppy will be pink. Therefore, we begin to knit with threads of this color. At the very beginning, we make a ringlet, which will begin knitting. And we carry out the usual columns without a crochet. Only six. In the other four rows, we need to perform six additions. And we get only thirty sticks (columns). Five rows will be knit unchanged. And then we will perform six decrements in three rows. We will end up with a ball, which will be the head of our pups. Pink thread we can already cut off, becausefurther knitting will continue lilac. You can take a different color, what kind of soul you want. Instead of pink, you can also take a solid, or beige, or white. We will perform six additions in the first lilac row. And we will tie two rows of eighteen sticks in each of them. We will perform six additions again and again we will fasten two rows. Then we perform six more additions and execute two rows, one of which we connect for the front stenochki loops. Let's change the color to pink. And for the rear walls of the hinges we will execute one row. We will perform six deductions and we will fasten one row. Fold knitting and count for each leg of twelve loops. We knit one of the legs in a circle three rows. Then we'll run six sticks, five consecutive increments, one post and a connecting post. Additions should go in front of the legs. We knit a second leg, like the previous one. Now we need to make a bottom for the legs, the sole. To do this, in the amigurumi-ringlet we perform five sticks. Then ten in the second row, that is, make five additions. And in the third row there are five more applications. We sew them with stitches without a crochet. 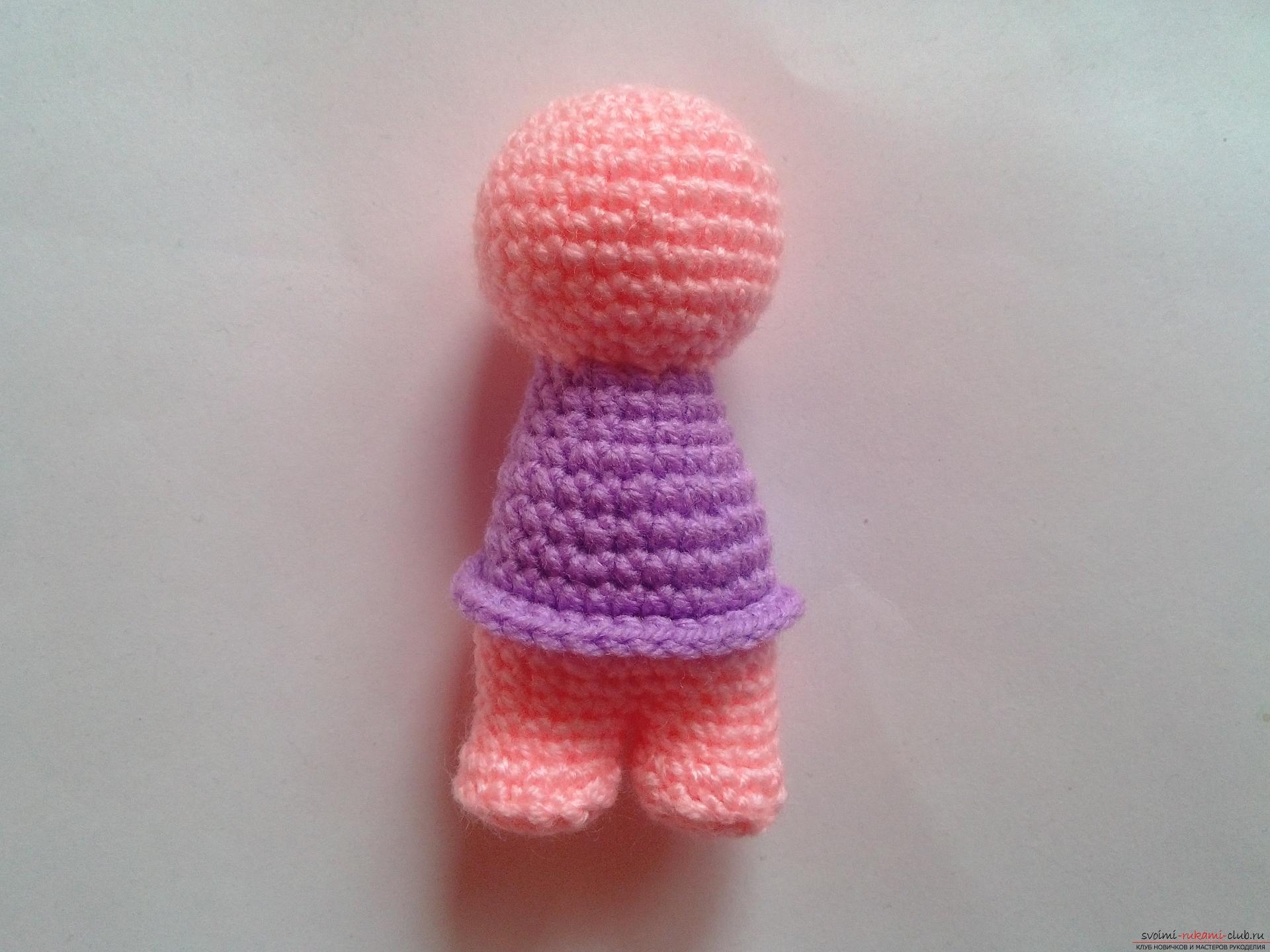 We begin to make pens with pink thread. In the magic amigurumi-ringlet we perform six sticks and then in the second row we perform six additions. We connect two rows and perform four decrements. Take the lilac thread and attach it. Tie six rows. Link the main attribute of the toy - the cap withhare ears. Again we make an initial amigurumi-ring. And we carry out six stoves into it. We perform in four rows of six additions. And we knit five ryadochkov unchanged. Now the ears. We also start them with a ring and six sticks. We perform six additions. We knit four ryadochka. We perform two decrements. We knit the ryadochek. We perform one reduction, we tie it to the end and we carry out the connecting column. He's the final one in knitting. And only after that the ears. They are much easier to sew when the hat is already on the toy. We try to sew the ears on one straight line so that it does not happen that one ear is behind, and the other, on the contrary, is ahead. And you can make a flower in the hand of our toy. Take the green thread and do all the same amigurumi-ring with six bars. We attach the lilac thread. We execute five air and a column without a crochet in the next loop. Knit all the remaining petals by analogy with the first. We glue beads or half-beads to where the eyes will be. Here is such a puppet in a costume rabbit turns out!