In this lesson we will talk about howto make crafts from vegetables and fruits for children of school and kindergarten ages. There are plenty of reasons for loving the autumn season. One of them is the expected harvesting. With the onset of cool rainy days, when the street no longer wants to go out as often as in the summer, the presence of juicy tasty vegetables and fruits not only pleases the eye, but also prompts the creation of something new and unusual. Promotes this and the beauty of autumn nature, inspiring creativity. Someone collects bouquets from leaves or finds flowers that have not withered yet, which then dries in books, and we suggest spending pleasant time with children, making crafts from collected vegetables or fruits. Everyone will find here for themselves a lot of amazing, as most of us are accustomed to using food for their intended purpose and do not represent how much you can make from it interesting crafts. Beginning to involve your child in this process, do not forget that skillful work with sharp objects will be required here, therefore an adult must be supervised. So, we turn to practical lessons onmaking children's crafts with their own hands. Hand-made from apples. As the first product, we suggest making "little men from apples". First, take a few large apples, pumpkin seeds, toothpicks and a knife. This is our "apple" artwork is ready! Now it can be proudly carried to a kindergarten or school. Handmade from potatoes and carrots "giraffe". For this craft, equally good materialthere will be carrots and potato tubers, so let's use both of them. Take a pair of potatoes of different sizes. The larger tuber will serve as the torso of the giraffe, the smaller one - the head. The neck is made of carrots, before cutting off its tip. The trunk with neck is fastened with toothpicks. Ears of a giraffe are made from seeds or matches, sticking them gently into the head. Eyes are preferable to make from some kind of cereal. Two grains enough to press into the potatoes. Of course, you can make a "giraffe" handicraft from carrots only. It is easy to guess that carrots require 7 pieces (four per paws and one for the trunk, neck and head). Also we fasten all the elements with the help of toothpicks and the giraffe is ready! Learning to make a mouse out of a pear. From vegetables, we turn again to fruit. Now as material we will use the pear. To the above materials, we need a small piece of wire. First, a pear is taken and two nares are made withtwo sides on top, which are then bent. So we made ears. To make eyes, we use pumpkin seeds. A marker of black color is represented by pupils. In the bullet you need to make two incisions for the eyes and put the blanks there. The tail, as you guessed it, we'll make of a wire that sticks into the pear from behind. Here you can make such an uncomplicated hand-craft for children in just a few minutes. Another piece of artwork from the pear - little men. 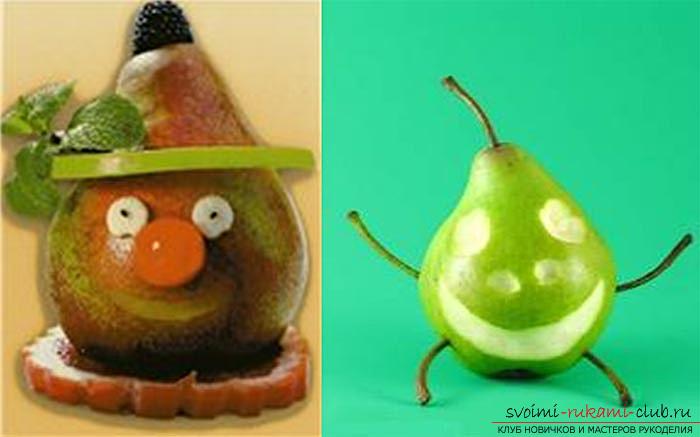 Here, the technology of crafting is similar to the one,when we made it from apples. Of course, if the material is a pear, then everything becomes easier. We work only with a pear and only a knife. Carefully you need to cut out your mouth, eyes and nose, and the hack is ready! Using toothpicks, attach your hands and feet. For those who are not satisfied with this simplicity of the craft, another option is suggested. For this purpose, a banana, a pear and a few grapes are taken. Cut a couple of circles from a banana and draw a black marker in two dots that will be eyes. They are fastened with toothpicks to the pear. As a nose, grapes will be used, and from another pear we cut out a circle that serves as a cap. A smile is cut with a knife. That's the whole process of creating crafts! We make a rat-Larisku from radish.

To make the same as the famousShapoklyak, Rat-Larisku need to have radish, salad leaf, radish, a few olives, toothpicks. We do everything in such order: 1. Radish is first washed and dried. It will act as the torso of the future product. All the foliage is removed, except for the place where the tail is located. Together with them, the roots are removed, with the exception of the anterior part, where the mustache is located. 2. Before the radish is cut off, and at this point the tooth is attached to the toothpick. A pair of toothpicks, serving as a mustache, are stuck together. 3. With the manufacture of ears, problems should also not arise. We perform incisions in the trunk where the lettuce leaves are placed and fixed.

4. In the end, you should make eyes. Cut the olives in two and attach them to the body with toothpicks. That's all, the rat-Lariska of vegetables - ready! We hope that this amount of crafts will be enough for you to learn the basics of creating children's crafts from vegetables and fruits with your own hands.