What is origami. The history of modular origami Under the origami refers to the ancient art of making all sorts of paper products. At the moment there are many versions of how this fascinating art form was born. Paper was discovered in China, and origami also comes from ancient China. Initially, origami was used for religious purposes for all sorts of rituals. For many years this art was mastered only by people of high class, since the ability to master the technique of drawing figures from paper was indicative of a good tone. But still one can say with certainty only one thing: origami developed to a greater extent not in China, but in Japan. Origami technique is one of the main components of the ancient religion of Japan Shinto, the symbol of which is the snow-white purity of paper. In the eighteenth century, this art was hidden from everyone and was transmitted only by inheritance from mothers to daughters. The first written recommendations for the manufacture of works in the origami technique appeared only in 1979. It was then that the first book was published. This is what gave rise to the development of the type of art so widespread in Japan today. However, outside the Eastern countries this kind of creativity came only after the Second World War. And today very many people all over the world are fond of origami. Moreover, at the moment this creativity is experiencing its boom and is at the peak of popularity. In addition to classic origami techniques, which assume straight lines, other techniques of this art give creative freedom, one of them is considered modular origami. The jump in the development of this type of origami occurred in the 1960s, it was in these years that art spread throughout the world. At the moment modular origami can be called international art. In the US, the modular origami came together with illegal migrants from China who arrived on the ship. Once in prison, they no longer had anything to do, but the paper is there. Thanks to the prisoners from China, the world was able to learn about this technique of folding, although in China it existed long ago. For the modular appearance of origami, very few schemes are known, most often the figures are created simply by illustrations or photos. Often masters create their own variations. Therefore, we can say that this technique requires imagination and significant creative elements. In other words, the modular style of this art is called 3D origami. A distinctive feature of this technique is that it is not created from one sheet of paper, but from separate paper parts - the so-called modules. Each of them adds all the rules of origami in the classical style. As a result, they need to be combined by the method of putting each other, so certain paper figures are obtained. Another very important distinctive feature is the total denial of the use of scissors, glue or tape when connecting the modules to a figure. Modular origami involves the creation of products from a variety of individual paper modules. Therefore, to make it work beautiful and accurate, work should be done carefully and carefully. Depending on the methods of connecting different modules, different shapes are obtained. Models can come out as flat or bulky. The first are most often represented by figures in the form of polygons, stars, etc. Three-dimensional figures are created in the form of polyhedra, as well as their compositions. Tools and materials More you need to stop on what kind of paper will be best for creating objects in the technique of modular origami, the module of what size is best used to create figures. Before you start creating crafts in the style of modular orings, you need to learn some secrets and tricks. Suitable types of paper:

Modular origami dragonfly Origami in the form ofdragonfly is one of the most common handicrafts. And if you do not know how to perform a dragonfly in the modular origami technique, check out the step-by-step instructions below and you will succeed. Dragonfly Symbols This insect is one of the oldest, its remains were discovered as early as the deposits of the Jurassic period. The Japanese honor the dragonfly and associate it with militancy, courage and courage, it is capable of bringing good luck and happiness. In China, the dragonfly is associated with the beginning of the summer period, instability and weakness. Today, the dragonfly is considered a symbol of lightness, grace and speed. Her, as well as the butterfly, is associated with immortality, as well as rebirth. Looking at the dragonfly, everyone should have thoughts about the fleetingness of our life, and do not re-incorporate it into something gray and dull. If you want to change something in life, you need to turn to the energy of this insect. Modern people are burdened with various problems and most often they do not allow themselves the ease that is inherent in the dragonfly. Presenting a souvenir in the form of this insect, I would like to hope that it will endow man with his free-flight energy, carelessness and joy. Schematic of dragonfly Dragonfly in modular origami refers to the category for beginners. The work on its manufacture is quite simple. Carefully follow the photos and repeat the same thing in reality. In this version, the dragonfly is made in blue, but you can pick up any other one that you like more, in addition you have the ability to change the size of the modules. In general, we can say that the field for fantasy is also very decent. For work you need 40 blue modules and 42 blue ones. They must be triangular in shape. In addition, prepare the glue and be patient. How to make a triangular module for creating a dragonfly Modules of a triangular shape are often used in the modular origami technique. To create a triangular module, prepare a sheet of paper, it must be rectangular in shape. Creation of triangular modules is possible both from sheets of a larger size, and smaller. The final size of the finished craft will depend on the parameters of the sheets. It is best to use rectangles that will be 1/16 or 1/32 of an ordinary album sheet. The resulting modules in their design have two pockets, as well as a pair of lower corners. Because of this, they are easily inserted into each other, and the figures come out voluminous. The third row is different in that the modules are inserted into each other. The fourth row will consist of three blue modules.

The fifth row contains two blue modules, and the sixth one consists of three blue modules. After that, there are two blue modules again, and in the next row it is necessary to reduce the modules. This will look like a figure when decreasing. The ninth row will consist of one triangular blue module. The tenth row contains two blue modules. After that, insert twice in a single module, you need to alternate their colors. In the illustration, it can be seen that the number of modules in the tail can be arbitrary. Adjust the length to your liking.

Add one more blue module to the edges, and in the middle you need to insert one blue module. Make two eyes.

Now, make wings. They need to do four pieces. Each wing should consist of ten modules, for a more secure fixation, it is best to immediately put them on the glue. Pay special attention to the direction of the wings: two of them must look in one direction, and two - in the other. Attach the wings to the calf, also dropping a little glue on them. 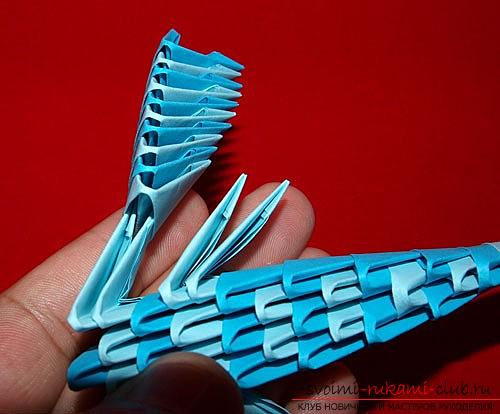 Glue the eyes, if desired, you can make a small proboscis. Now the dragonfly is ready to give you and others ease and carelessness.

And finally a little interesting about origamiCreative people use modular origami to express themselves and their thoughts. Many scientists are trying to explore the geometry of this kind of creativity in order to apply it in the future for beauty. Doctors resort to this skill in order to heal their patients. Everyone understands that it is impossible to act mechanically and thoughtlessly in this matter. Due to this, modular origami exercises act as a kind of psychotherapy, which, at least for a while, can distract people from daily gray thoughts. Origami directs our thinking on creativity. Work on the origami figures can increase the activity of both the left and right hemispheres of the brain, since it requires total control over the actions of two hands. And this leads to the improvement of many indicators. Modular origami is not an easy form of art, but this is its main feature. For each origami player, the first thing is to solve the puzzle. But just open all the secrets of origami figures will not work. You need to have some knowledge in the field of geometry, as well as mathematics. Many scientists say that creating origami figurines is very useful. Passion with modular origami is able to teach consistency in actions, develop the ability to self-control minor movements of the hands and especially the fingers, improve spatial thinking. Being engaged in such creativity, everyone is able to learn to read and disassemble drawings for the folding of certain figures, develop self-confidence and one's own strengths, and develop their creative abilities, which maybe you did not even suspect.