Drawing geometric bodies for beginners -an important stage that must be passed. This lesson is easy and does not take much time, but the skills are sure to be useful in further work in the depiction of various buildings, buildings, objects and objects. How to draw the usual geometric bodies you can learn from the materials of our article. Drawing simple geometric shapes, in particular a cone, a cube, a prism, a sphere, a pyramid, and so on, is a necessary stage for painters who are just beginning to learn this art form. Whatever subject you decide to portray, you can not do without these simple figures. At the heart of any object of everyday life, which is easiest to draw, they lie. By acquiring these skills, you can easily draw any architectural structure, vehicle and other objects. Let's try to learn how to draw each of the figures. Cylinder image Very often, when creatingthis or that figure, we need, figuratively speaking, to place the object in the cylinder. To do this, you need to know the rules of its construction and the ability to use them in the work. To get a drawing from this geometric body, you need, first, to draw an axis. Relative to it, the main elements in the form of ovals will be outlined. As can be seen in the figure below, the image of ovals having a large diameter is always drawn with respect to the axis of the represented figure at a right angle. After the sizes of the bases have been determined, the length of the body itself, neat lines need to draw circles and draw additional lines to them. These sketches need to be done with light strokes that are slightly visible to the eye. In our figure you can see two variants of the drawings of the cylinders, one of which lies, and the second is in the vertical position. If we want to build a cylinder, we mustit is necessary to use auxiliary lines. They are a means to clarify the proportions and position of the figure in space. Separate sections of the geometrical body should be shaded. The shading emphasizes the volume of the figure and shows the direction. Drawing the pyramids and prisms with a pencil To draw these two bodies without causing any difficulties, especially if they have many faces, they need to be mentally placed in simpler shapes. If this is a pyramid, then we will fit it into a cone. If we are talking about a prism, then it is necessary to inscribe it into the cylinder. While working on the picture, we will proceed in this way. Having marked the general composition of the future image on the sheet, we proceed to draw the base. To make it right, we will initially draw a circle (in perspective) that has the necessary dimensions. Then, on the drawn circle we mark all six corners of the figure. According to nature we need to check the location of the corners in relation to each other. If the picture is correct, the parallel sides must converge at the vanishing points. To make it easier in the future, these actions, you first need to learn how to draw figures that are in an upright position, and only after that begin to draw the lying pyramids and prisms. 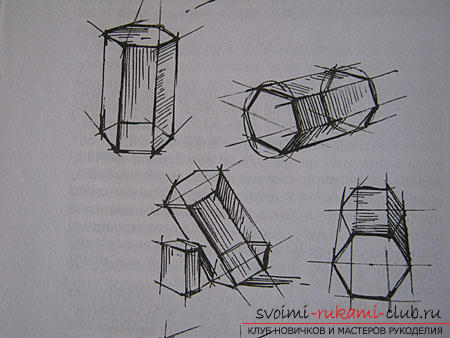 The process of creating sketches of the box To makesketch drawer, first you need to determine its position in the surrounding space. After lines along the edges of the contours of the entire object are made necessary marks, it is required to map in the perspective absolutely all of its walls. Those lines that cut off the shape of the wall, must be held abruptly, immediately. This approach makes it possible to determine the level of the horizon, the point at which parallel lines converge, to verify the transmission of the contraction of faces in perspective. When drawing a box, training is important. To achieve a good result, you have to draw an object in different positions from nature.

The technique of isolating allows you to make paintings from threads, and due to its simplicity, it is suitable even for beginners.