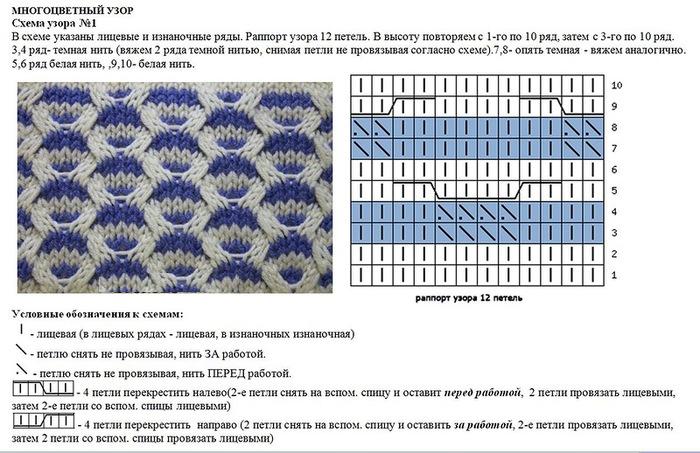 
This needlework as knitting, it is importantbe able to perform a variety of patterns. Possession of this skill allows needle women produce all the variety of reliefs and drawings on the knitted fabric. The study of methods and techniques of knitting does not take place at once, it takes a fair amount of time. Each time, the range of possible patterns and techniques is expanding, and we have an increasing amount of knowledge that facilitates the formation of many products from threads using spokes. In this lesson we will look at techniques and schemes, through which needles knitting patterns, which are always present and lowered shot loop. In the first part of the lesson we'll explore shotloop, and then lowered. To associate the removed loop (P), you must remove it from the working needles, and put on the right. In this operation it consists in moving the same do not knit loop. As a result of this technique are formed elongated U. Notice in the video below, where you will see some of the possible patterns with removed loops. This relief is called "Astra".
Video: Pattern "Asters"

Video: "The cells on the underside surface of"

When forming the pattern of the thread can be taken Ppositioned on either side of the work, or to work behind it. It should be noted the peculiarity taken P that doing them several shades of thread, we have as a result of patterns in the form of various geometric shapes. This may be strips or squares strokes. Examples you can see in the video.
Video: The pattern "grid"

There is a pull shot technique P. As a result of this technique are formed so-called structural patterns that form protruding parts on the knitted product. It can be both convex and hollow, and located on top of the overall relief isolated long loop. An example of the structural patterns in the image below. As you can see in the photo, structural patterns visuallysimilar to the original folds, which are often used to perform the function of decorating knitting knitwear. But if you want almost every such relief may be associated with needles independently as the main motive. Previous loop (P) in the structural patterns play the role of the violin for the formation of a special invoice. The multi-color knitting, they determine the appearance of colored threads in various fanciful geometric shapes. Also, ideally removed loops embedded in any knitting techniques because they are not subject to deformation. Examples of patterns with the covers loops

Now we give some examplessimple patterns with the covers loops for beginners. Examples are provided with a diagram explaining knitting techniques of each particular pattern. The first pattern is removed from the elastic loops. Vertical rapport consists of two rows. In the first row (R) knit two purl loops (IP), then the two (P) is removed, leaving the thread before work. The second P perform two PIs, then two end loops (LP). In the third repeated P repeats the first, and so on. The next tune is called the horizontal chain of filmed P. Scheme explains that the first and third P performedof the PL, and the second and fourth of the SP. In the fifth row knit SP, then remove the U, with its thread in front of work. Sixth P is removed from the loop (yarn behind work), which is performed after the LP. This video master class you will seeknitting technique motif with removed loops. We collect the spokes number n is a multiple of six, plus two edge, that is, fourteen units. First row bind LP, and second only to purl. The third and fourth P is repeated the first and the second, that is, we were binding four P stocking st. From the fifth P start knitting shot loops. After edge knit P front, followed by a three nakida, and repeat until the end of the series. In the next sixth row remove an edge, nakida reset with needles and P remove and drag to the right needle. In this way, transferred a total of six loops. Three of them leave on the left spoke, and the other three put on an extra pin to work. P knit with needles as SP, then provyazyvaem P with pins. It was the first picture rapport with the covers loops. Similarly, we carry out, and the second sample rapport. After the end of the sixth P rapport is repeated from the first row.

Deflated loops in the pattern

Inexperienced needlewoman sometimes confused loweredloop with removed loops, while making a mistake. These are completely different types of knitting. Now we will try to explain to you what is the difference between them. It lies in the fact that lowered the loop are not transferred from one to the other spokes, and removed and dissolved. Sometimes knitters P lowered, making mistakes in the work, and then the leaf turns a defect in the form of holes. This web can blossom further. You will not be easy to "catch" the blossoming of the canvas, and it will have to redo the whole. But there are such patterns, which lowered the loop are performed under the scheme. This is done to fulfill a special semi-transparent openwork. Most often used in the formation of the loop lowered light spring and summer models, which can be obtained is extremely stylish and impressive. Deflated loops can knit two techniques. The first technique is to dissolve them, from a number of typesetting. This is done in a simple alternation of several conventional and lowered P.

The second way is to particular blooming Ppoint. In this first desired point nakida performed, then the two loops are knitted together, bringing the total amount does not change. After that we perform multiple P, P and descend one located to nakida. To keep the amount of P, the necessary nakida. And now look what a spectacular and stylish summer scarf can be connected by means of spokes lowered loops. The final video master class showsknitting modern spectacular pattern with run-flat hinges. This ornament is executed finish, or a whole sheet, such as a scarf. The pattern is a two-way. It consists of a dense track garter stitch and transparent openwork bands. This pattern fit very quickly, and the yarn must be very little for him. To recruit the sample any number n, and the first four rows of knit only LP. In the fifth knit an edge P P, then perform two nakida, and another LP. This rapport is done only until the end of R. P. facial should be carried out following the four P in the first row to perform an edge P and all nakida descends from the spokes. Then knit the front loop. Repeat this until the end of knitting, then squared his canvas. We got a beautiful openwork path disposed horizontally. Now to secure it through the four series of facial loops, and then knitting it is necessary to repeat from the beginning.
Video: Two-way design with a deflated loops Embroidery letters of the Russian alphabet and font schemes examples