A set of necessary for work: 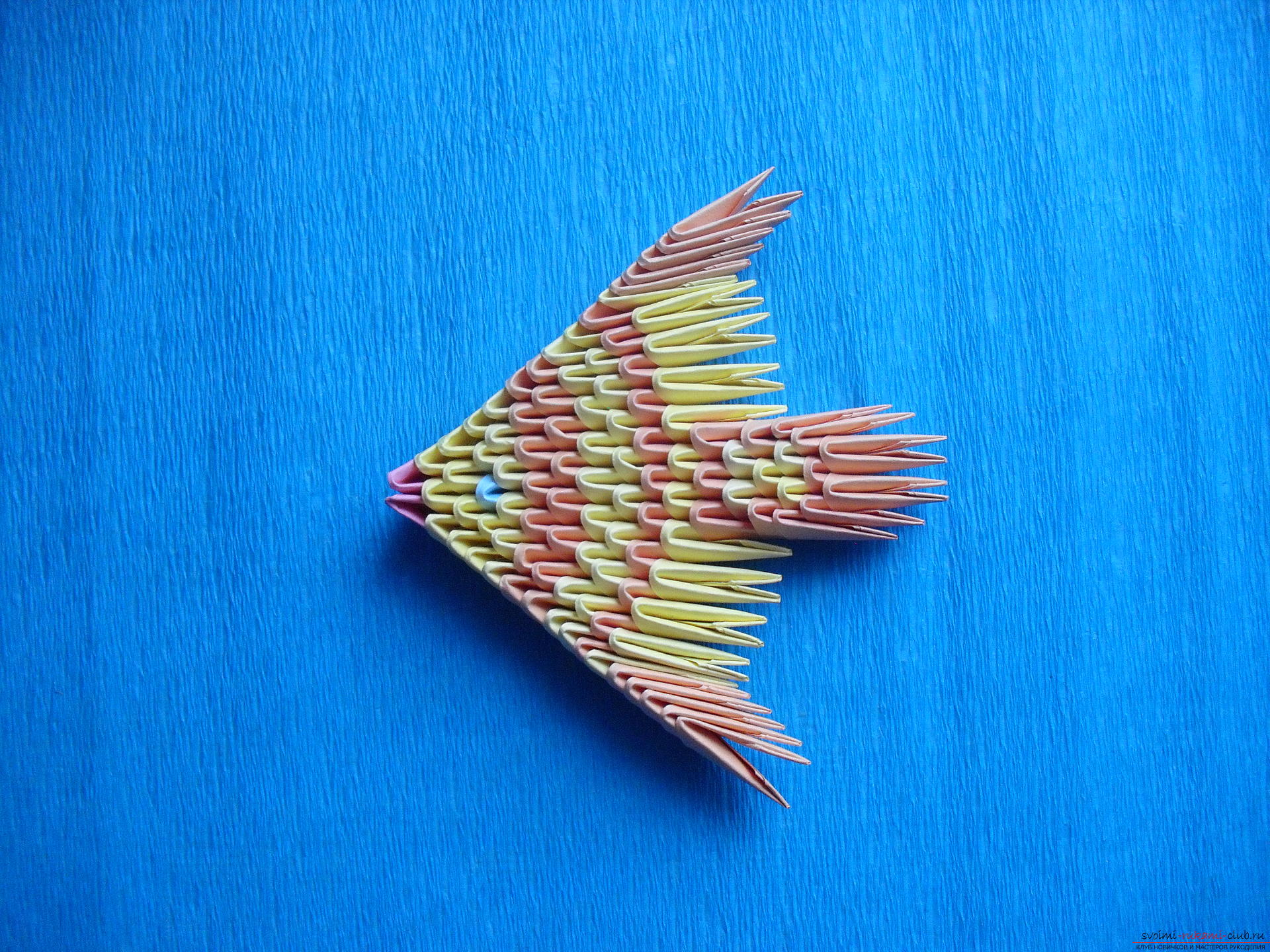 Paper is cut into rectangular blanks in size5,5x4cm. or one thirty-second part of a sheet of A4 paper and make triangular modules out of them. To create a craft, you will need 53 triangular modes. yellow, 48 orange, 2 pink and 1 blue. Connection mod. and the formation of the product begins with the front part - the head. To do this, triangular blanks of pink, yellow and blue are required. Connection scheme mod. illustrated in the photo. From the sixth row we begin to form the main part - the trunk of the fish. This will require triangular blanks of yellow. and orange. colors. The connection of the details of the trunk is carried out according to the scheme. The sixth row is 7 orange; The seventh row is 8 orange.Maud.; The eighth row is 9 yellow; The ninth row is 10 yellow; The tenth row is 11 orange; The eleventh row is 12 yellow mod. A magic fish that fulfills wishes is almost ready. Now make the tail and fins. To produce the tail, triangular preforms of orange are required. and yellow. colors. First, before assembling the twelfth row, you need to count 5 modes. on both sides of the trunk. In this way, the middle is planned. Further, two modes. insert between 5 and 6 mod. 11 rows, and the third string between them. The diagram of the connection of the elements of the tail is presented in the photo. Twelfth series - 3 orange.; The thirteenth row is 2 yellow; Fourteenth row - 1 orange. mod., 1 yellow. mod., 1 orange mode; Fifteenth row - string 2 mod. yellow. color and 1 mod. orange. color on the protruding part of the extreme mode. at both sides. In total there are 4 modes in this series. The sixteenth series is 3 orange. The seventeenth row is 2 orange. Assembling the back of the fish is complete. We proceed to the final stage - the execution of the fins. The fin is created by stringing triangular modes. one on top of the other in the outer pockets. Each element consists of 5 orange. The assembly diagram is illustrated in the photo. Your magic fish is ready to fulfill wishes!

This master class will teach you how to make a rainbow fish with the technique of facing and appliqué.

This master class will teach you how to make a vase with your own hands from a modular origami.

This master-class step-by-step modular origami with a photo will teach you how to make your own handiwork - a fungus.