Every year in December we decorate the Christmas tree with differenttoys, tinsel, balls. We buy jewelry in stores. But you can make them yourself. Then they will only be in a single copy and only on your Christmas tree. In this master class we will tie a Christmas ball crochet. He knits very easily in the grandmother's technique.

Colors for the ball can be taken and any others,what like. And the ball itself must be necessarily white, as it will look through knitting. Begin knitting the ball from a chain of ten air loops, closed in a ring. You can make the number of loops and smaller, so that the hole in the middle is not so noticeable. Knit the ball, we will be in the technique of the grandmother's circle and therefore finish the work quickly enough. It matches almost the same as the square. And this technique is very simple in execution. We will make three air (this will be our first column with a crochet) and in a ringlet of six air loops we will connect two columns with a crochet. All elements in knitting will consist of such columns with one crochet. And they will all knit equally. Therefore here it is impossible to get confused. We will make one more air loop and we will fasten itfive more parts, consisting of their three columns with a crochet and one air between these parts. And from these elements we will have a ball. We connect the first and last loop of the row. We will always connect the connecting loop. 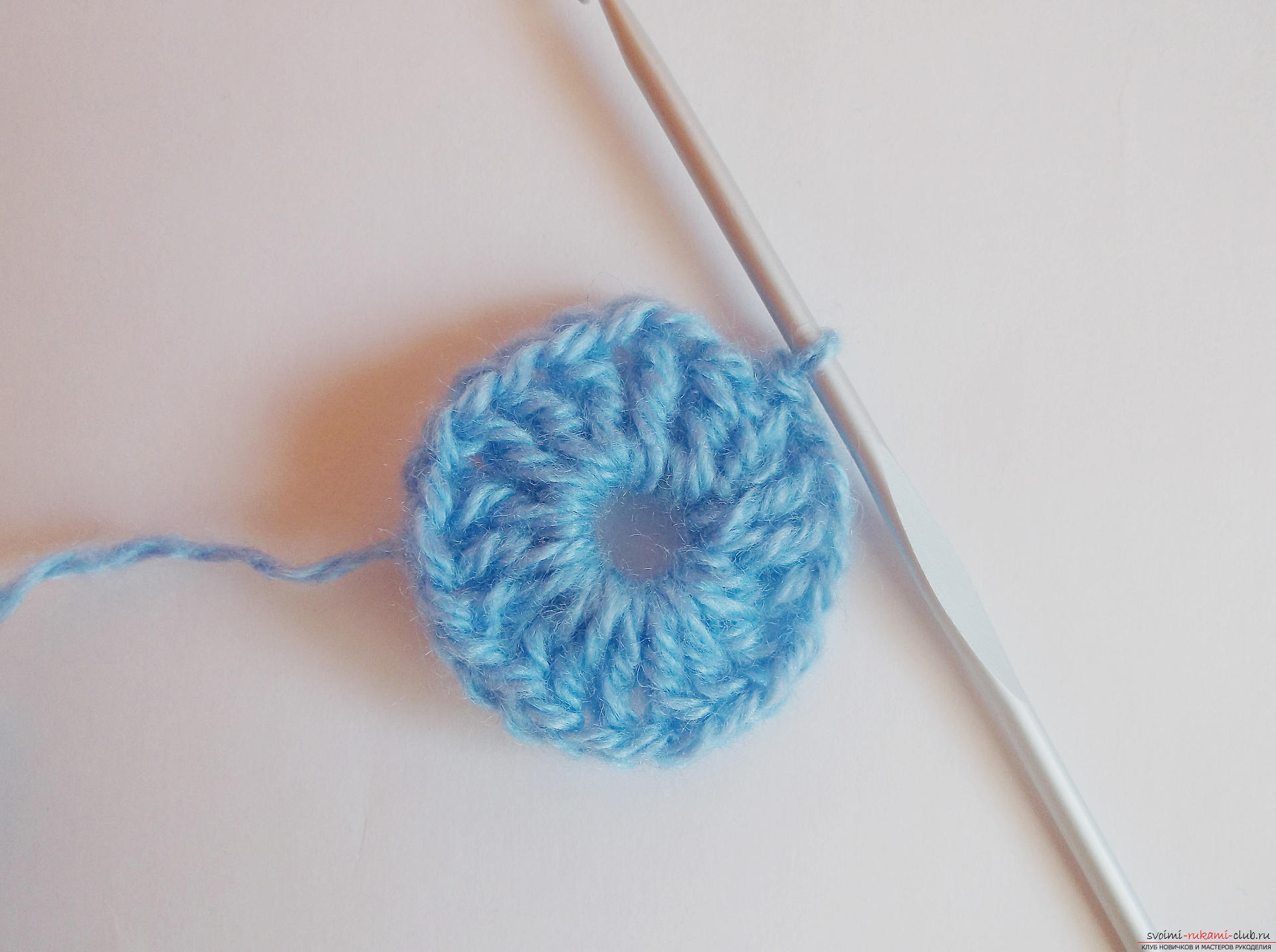 Now we need to change the color. Each new series will have a different color from the previous one. Now let's make four air loops and in the next arche we'll tie the same element that was knit at the very beginning, that is, three bars with a crochet. We will connect the air loop and in the same arch we will link the same element of the three columns with the crochet. Again we'll do air and continue knitting oncircle. In the last element we knit two bars, since the air loops at the beginning of the row replace one column with a crochet. We join the third loop of this chain from the air loops. To join at the end of the row is better at once yarn of a different color, the one that we will knit the next row. So you will not see the transition from one color to another. Now we will connect the half-bolt to the arch. And so we will be in the middle of the arches. Let's start the next series. We will make four air loops and in the next arch we will fasten an element of three columns with a crochet. Here in each arch we will knit one such element. Between the elements we make one air. Thus, the previous series with us went with increases and increased, and this series goes without additions and the circle begins to take the form of a halved ball. We connect with the third lifting loop. And we sew one half-pipe to the middle of the arch. The next (last) row is knitted in the same way as the previous knit. That is, he, too, goes without increments and forms a ball. We need to relate these two details. Therefore we knit similarly and the second. After that, we sew the two parts of the ball together with columns without the yarn of the color that follows the color of the last row. In this case, after the blue, the color is pink. Sew about half the ball. Now we insert there either a tangle of white color,or a foam ball and stitched together without a crochet until the end. We make a loop from the air loops. The loop can be made of any length that is necessary. Here is such a simple, but bright ball is obtained! You can bind a few pieces and decorate these balls with a Christmas tree. Knitted decorations look at the Christmas tree very unusual and original. We make a new Christmas tree toy from the old, using the papier-mache technique. Master class with description and photo.