This master class will help you knit the children's mittens with hearts. The drawing will be made in jacquard technique. For knitting mittens with hearts we will need:

We will only knit the gloves with two knitting needles. The third is needed only to bind a finger. You can bind such mittens in a traditional way on five spokes, but on two they are more convenient, since it will be easier to count the eyelets for the pattern. We will pick in the beginning twenty loops on spokes. And we will continue to knit an elastic band. And after the elastic band is ready, let's move onto knitting the main part. It will be black. And we will knit now with the facial smoothness. So we knit the front part of our future glove with facial loops, and purl, respectively, with purl loops. In total we need to tie ten ryadochkov. And in the last one for drawing we'll make one more. This is to ensure that the drawing is located exactly in the middle of the mittens. And then we have a drawing, which we carry outred yarn. We will knit according to this pattern. The heart is a very simple drawing, which can be easily created even by those who will knit in jacquard technique for the first time. 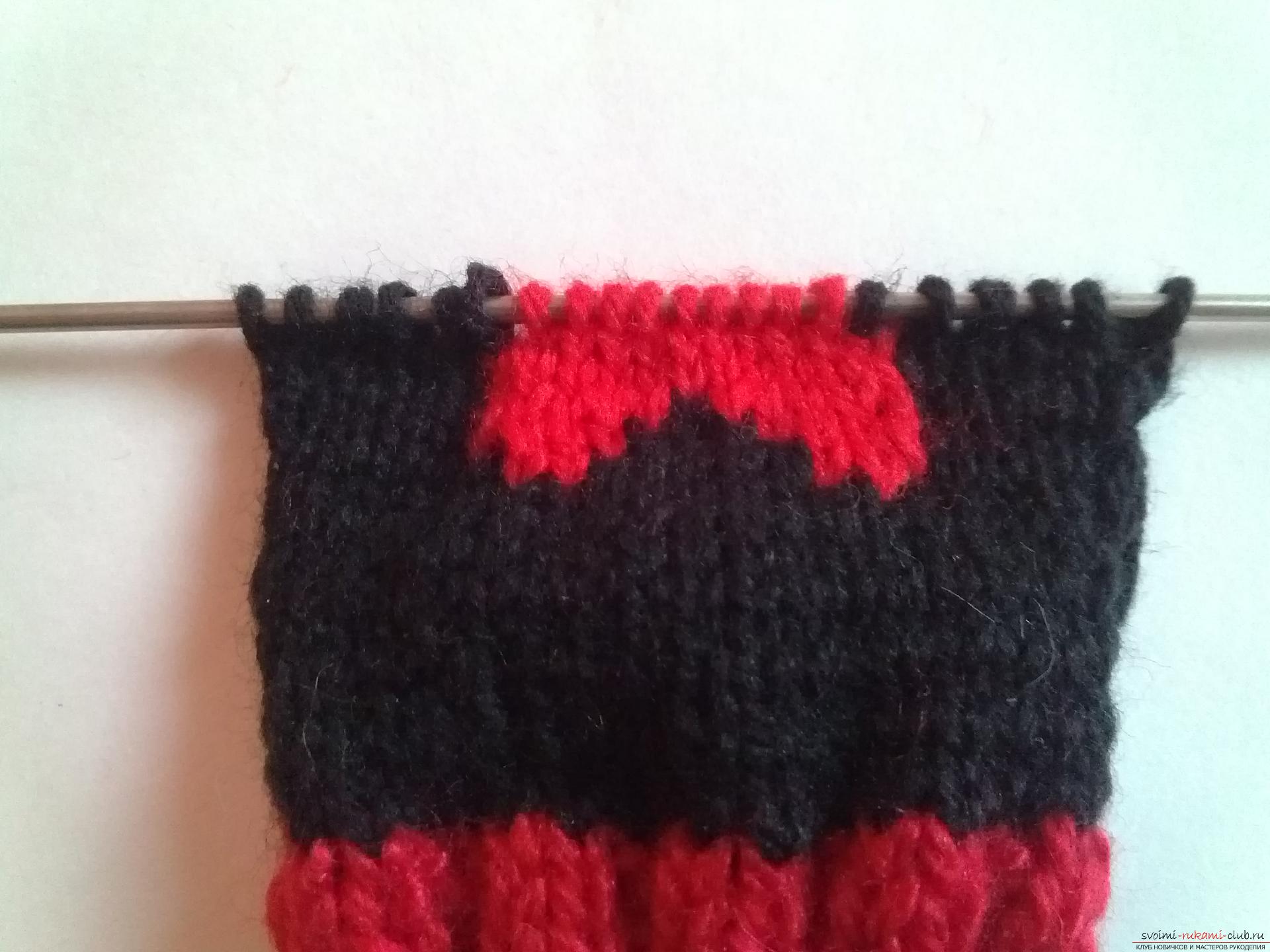 And now we knit five ryadochkov. And we start to reduce from two sides. Just on each side in each row we will tie two eyelets together. One part is ready for us. For the gloves they need two. Only the second part will be without a picture. We knit first the elastic, then ten yards of black yarn. And in the eleventh row we knit three loops and six more threads of a different color. The rest of the knitting is with us, as in the first part, only without a pattern. The second part should be the same size as the first one. Therefore, you need to count the rows in the process of knitting. Next, we remove the thread of contrasting color and put on the loops on two spokes. With the third knitting we will perform knitting. We knit a finger of the required size. In the end we subtract also on each side. Like the main part of the mittens, the finger is knitted with the facial smoothness. And we will have a red color, like an elastic band and a mitten pattern. And it remains only to sew two parts and getready mittens. The faces are attached to each other and sewed together. Now we'll turn it around and straighten it. Tie the second mitten. Here such mittens with hearts turn out! In the same way, you can also knit mittens for adults. To do this, you just need to increase the number of loops and make the drawing a little bigger.

A master class on crochet will teach you how to tie your mittens with your own hands.

This detailed master class with a description and scheme will teach you how to crochet a hat-owl.