Undoubtedly, any bird is beautiful in its own way,But our hearts conquered these wisest winged owls! Today they are portrayed almost everywhere. On clothes, on cases for mobile phones, on furniture, on bed linens, anywhere! Therefore today we will weave a soviet of gum that will decorate our interior.

We will weave an owl according to one principle, onlyeach row will be different by the number of elastics tied through one loop. All the parts except the paws and ears will be weaved with the Lumigurumi ring. So, we will dial the Lumigurumi ring. To do this, we wind three times the blue rubber on the hook. That is, let's put it on, and then we'll put it on two more times. Then hook the hook with one more rubber andwe transfer all the loops from the hook to it. We put the other side of the rubber band on the hook. There are now two loops on the hook, we conduct the first through the second loop. Next, we hook the hook into a ring of three loops. It was formed when we wound the rubber band three times on the hook. We put a hook in it and stretch through it one more rubber. We put the second side on the hook. It has three loops. We spend the first two. And again we hook in the same ring. So, we need to weave just six gum. As a result, at the edges will be like a chain of loops. There will be five and one on the hook. On that loop, which hooks on the clip. She will show us when the series is finished. This clip is disguised at the end of each row. This is important not to forget to do. This is the Lumigurumi ring. Next, we will weave by analogy. The next series of plait according to the scheme: 2-2-2. That is, we will weave two bands in each loop. But not at the same time, but in turn, looping into one loop twice. We'll get eleven loops plus one on the hook. A total of twelve loops. Better to recalculate each loop toin time to correct mistakes. The third series of the plait is according to the scheme: 1-2-1-2. That is, in the first loop we weave one rubber, and in the second two, in the third one, in the fourth, two, and so on. As a result, we get eighteen loops. Fourth row: 1-1-1-1-2. That is, in four loops we weave one elastic band, and in the fifth two. Four more on one, in the fifth two and so on. Total we get twenty-one loops. Tenth row: 1-1-1-2. As a result, we get thirty-seven loops. The eleventh row: 1-1-1. In the end - thirty-seven loops. In the twelfth row, we need to reduce the weaving. To do this, we will capture not one but two loops at once. By the scheme: 1-1-1-1-decrease. That is, we weave the first four loops on one rubber band, grab the fifth and sixth loops together and we weave one rubber band through them. Next, make eyes. For them, we need white and black gum. We pick up the ring with lumigurumi from seven elastics. One rubber band is the initial ring and six loops. The second row of the plait is as follows: 2-2-2. That eats two gums in each loop. As a result, we get twelve loops. Third row: 1-2-1-2. The last rubber band is weave a little differently. We put it on the hook and conduct it immediately through all the bands on the hook and only then we throw the second side onto the hook. We draw the first loop under the second and get a knot. Now we need to make black stripes on the eyes. We put the hook inside the weave somewhere from the edge. How would we pierce it. We put on the tip of the hook a black rubber band and stretch it to the other side of the weaving. We leave the black loop on the hook and put the hook under the two eyelets. Let's make the second eye.All protruding nodules just from the inside of the eye are tying in the loop. Immediately make the ears, beak and paws for the owl. For the ears we will use the same color as for the owl. Two blue rubber bands are wound three times per hook. Then again, take the two gums and transfer them all the loops from the hook. We repeat one more time. We fasten the eyelets with a clip or we can make a temporary loop. There are two such details. For the paws, we will use the gum of orangeWe untangle one rubber on the hook three times. We take two elastic bands and transfer the elastic bands from the hook to them. Move the weave a bit further away on the hook and repeat two more times. Now remove all the loops on the two gums in the usual way. Now, we take two gums again. The very first loop is removed from the hook and held by the fingers. We wind two rubber bands on the hook three times. We return the first loop, which was held by fingers, on the hook. 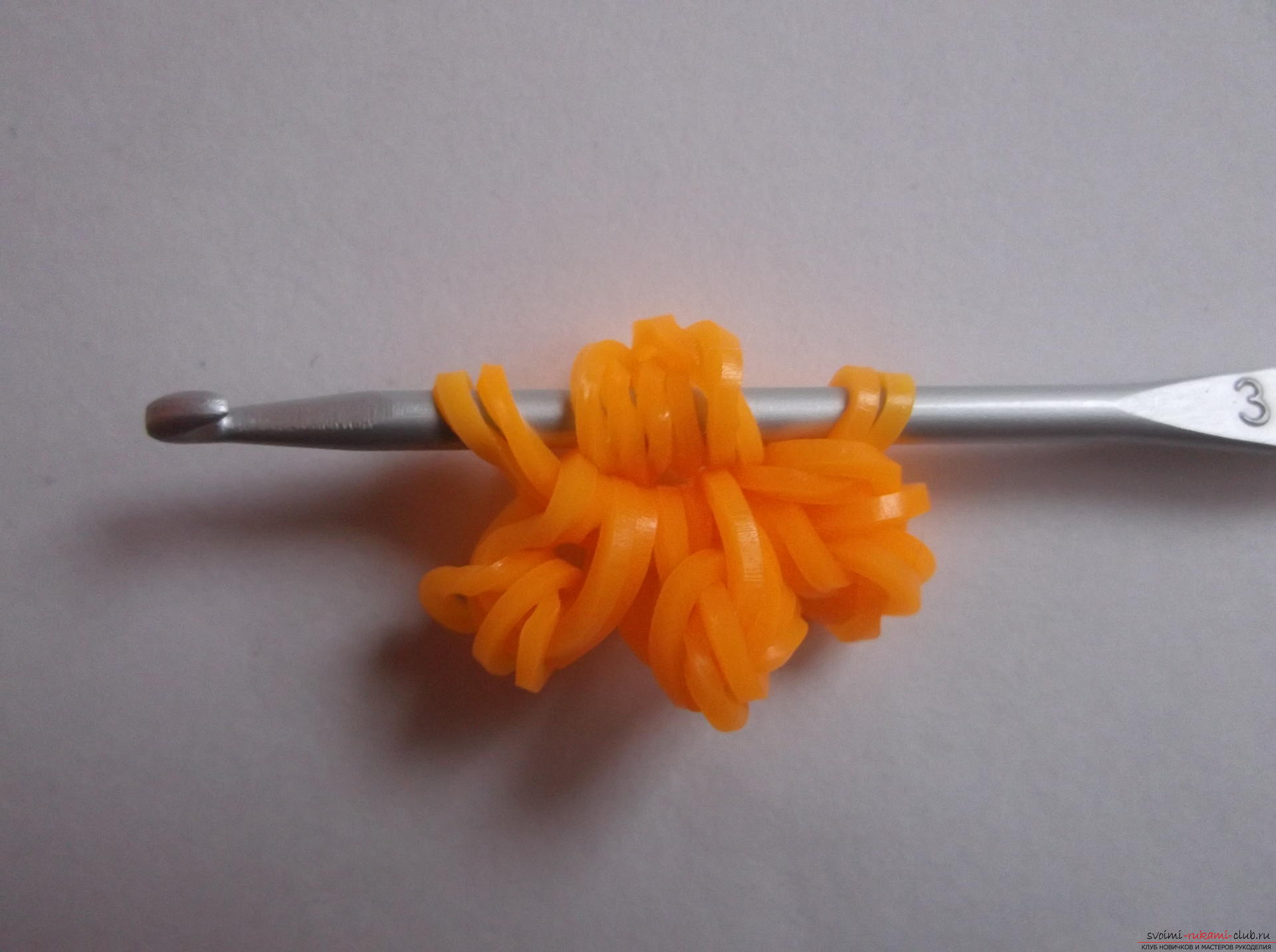 We sew the clip with the ears. We determine the place. We set the hook under four any loops and we catch two crocheted eyelets on the ear with a crochet. We stretch them through all the loops on the hook. We hook the second two crochets from the eyelet. Now we catch the blue rubber crochet hook and transfer all the loops from the hook to it. We spend one part of it under the other and tighten the knot. We hid the bundle in the weaving. Also attach the second ear opposite the first one. We fix our eyes.We apply both eyes and determine how they will be directed at us. At our owl, black strips in the eyes will be located horizontally, but you can also do them diagonally, pointing towards each other. So, we have determined the place. We draw a hook in two loops on the eye and grab two loops from the owl. We take the blue rubber and pass it through all the loops on the hook, there are four of them. And we make a knot. In the same way do the eyes on the other side. We hide the loops in the weaving. Strongly do not wind the hook so as not to catch the filler. The second eye is attached exactly the same way. Now we make the edging for the eye. We take the rubbery purple and we will hook the hook only under the back of the eye loop. Next, we'll hook up under one loop on the owl itself. It is desirable to look for a loop as close to the eye as possible or even slightly underneath it. So, on the hook, there are two loops, one white, the other blue. We throw on the hook a purple rubber and carry it through all the eyelets on the hook. We put the second side on the hook. We spend the first loop under the second. So tear round the eye. We hook in the next loop and grab one loop from the owl. We transfer it to a rubber purple. The last loop is tightened in a bundle and hides in the owl. Just the same way we weave the second eye. Immediately attach the beak. Two orange gum twists three times onto the hook and pass through two more gums. We put the second side on the hook. We remove the weaving from the hook. We make a hook between the eyes. You can even make four loops. We catch one side of the beak and pass through all the bands on the hook. We put the second side of the beak on the hook. We fasten with a rubber band of blue color. We tighten the bundle and hide it in the body of the owl. We'll wingle the wings. We dial the ring with lumigurumi from blue rubber bands. The second row: according to the scheme 2-2-2. Third series: we change the elastic bands to violet and the plait according to the 1-2-1-2 scheme. We attach the second leg.Well, now we have to attach the wings. Determine the place. Approximately where the eyes are top. Wings will be under the ears. We will attach for that rubber, which was tightened at the end in a knot on the wings. We lead a hook through four loops on the owl and grab this knot on the wing. We loop through the loops on the hook, stretch. We release from the hook. We make a hook in the nearest to this loop two eyelets on the wing. We put on the loop, which was lowered from the hook, back on the hook. And we stretch it through all the loops on the hook. We tighten it. We extend this loop and push the wing into it. Also attach the second wing. All! That's such a funny owl turns out!